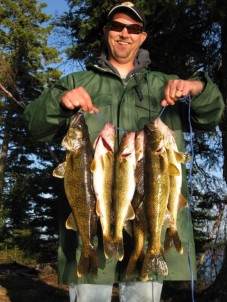 One of the biggest mistakes made by the novice angler is over rigging, using too large of a hook, heavier than needed weight with an oversized bobber presenting a unnatural look, reduces the ability to detect fish strikes in their fishing presentation. The best application is to select the lightest possible terminal tackle suitable for the condition and the species of fish.

In this section we will review the HOOK

Fishing Hooks
As a rule, use the smallest hook possible for the size of fish you will be fishing. Small hooks allows the live-bait presentation to look natural.   Small hooks also penetrate quicker than larger hooks upon the fish strike. Always test your hook for sharpness.  Sharp hook points will catch more fish than dull hooks. To test your hook simply draw the hook point across your fingernail, a sharp hook will leave a light scratch and digs in to your nail. A dull hook will skate across your nail without digging in. When necessary touch up the hook point by using a hook file or sharpening stone, simply draw the hook sharpener against the point of your hook a few times (parallel to the shank) on the bottom, and then take a couple of quick strokes to each side of the hook.

Don’t be misled that new hooks out of the box are always sharp especially the cheap hooks that are made of soft poor quality steel. Even high quality hooks will dull over time and use by hitting rocks and debris in the water.

Another option is to use chemically sharpened hooks. Many quality hook manufactures offer a line of hooks that are made of higher grade steel and then dipped in a chemical bath which gives the hook a super sharp hook point. These hooks can be expensive compared to conventional hooks, but the advantage is a super sharp hook right out of the package. The bottom line is always use a sharp hook.

Hook Sizes
When it comes to hook sizes it tends to be little confusing. There is no standard when it comes to classifying a hook size, generally when a single number is used such as size 12 verses a size 8 the higher the number the smaller the hook. The classification system ranges from 1 largest to 32 smallest. To make it more confusing hooks that are sized using a fraction type, for example 5/0 ( pronounced five – aught) compared to a 1/0 the sizing system is reversed so the higher the number the larger the hook. 1/0 is the smallest up to the largest hook at 19/0

The Anatomy of a Fish Hook
The parts fish hook are referred as: It’s point- the sharp end that penetrates the fish’s mouth or flesh; the barb – the projection extending backwards from the point, that secures the fish from unhooking; the eye – the end of the hook that is connected to the fishing line or lure; the bend and shank – that portion of the hook that connects the point and the eye; and the gap – the distance between the shank and the point.

Aberdeen
Light wire long shank hook, perfect for Walleye under a slip bobber or attached bobber rig. The light wire limits excessive puncturing on minnows which helps them live longer on the hook, the long shank allows the angler easy removal of the hook from fish that tends to swallow the bait.

Bait Holder
The bait holder hook is one of the most popular live bait hook styles today, the additional barbs on the shank holds the bait more effectively, such as night crawlers and leeches.

Circle
Circle hooks are an excellent choice for live bait catch and release anglers. Upon a fish swallowing your bait, the inward bend of the hook point allows the hook to slide along the inside of the fish’s throat until it reaches the mouth. A sharp pulling hook set is not required, just maintain tension and the fish will hook itself in the corner of the mouth as the fish moves away. The lip hook rate using a circle hook is about 95% it also reduces the mortality rate of fish to be released to fight another day. Very popular hook for Large Northern Pike.

Egg
Commonly called salmon egg hook, designed with a turned up eye and offset bend, so the hook rides upward along with the placement of a barb on the shank which holds the bait. The salmon egg hook is used primarily for drift fishing along current by using natural or imitation salmon eggs, spawn sacs, worms and grubs.

Octopus
The extra gap and rounded shape of Octopus hooks are very popular and used for most species of fish. The Octopus is ideal for rigging bait for Pike and Walleyes and are good choice for building crawler harnesses. They are available in an assortment of painted or metallic colors.

Rotating
A special compound curve on the offset/rotating hook automatically turns when a fish bites on the bait. The sweeping rotational curve places the point in position for penetration from any angle. The offset/ rotating hook twists, holds bait better and hooks fish better.

Treble
Treble hooks are a single eye of three hooks fused together with three shanks evenly spaced. The treble is mainly used on artificial lures and spoons attached by using a split ring. Treble hooks today comes in a assortment of colors as well as feathers tied on as a trailer/teaser hook on lures.

Weedless
A weedless hook has a light wire wrapped on the shank formed in a loop that covers the point of the hook. This allows the hook to be fished in weeds logs, trees, stumps, rocks and lily pads. Upon a fish striking the bait the wire compresses exposing the hook point.