Shorter days and cooling water are signals to northern pike that autumn has arrived. During fall, these sleek predators will feed heartily to pack on energy reserves to help them survive winter’s hardships. There are few better ways to catch pike in cold-water than using big profile jigs, and giant tubes are a particularly productive bait. 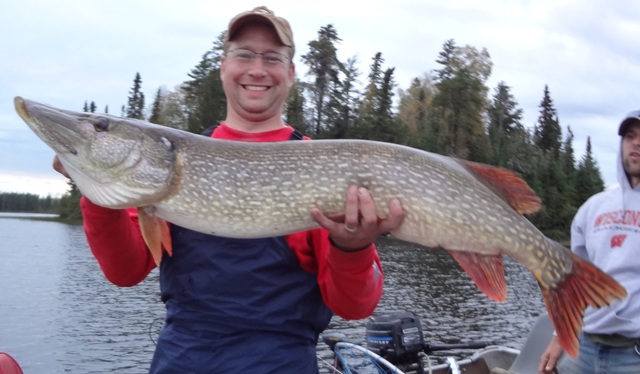 Pike Locations from Early Fall to Ice Up
Fall is very much a time of transition. At the start of autumn pike will still relate to healthy weeds but as shallow plants die look for northerns in deeper vegetation zones. Tributaries and the mouths of feeder streams on rivers are also good late season spots as baitfish stage in these areas. Sharp breaks where walleye hold will also attract pike, which will eat walleye any chance they get. Rock-gravel reefs and points adjacent to deep water are good whitefish and cisco (lake herring) spawning grounds. These two prey species spawn between November and December, so these structures make prime late-fall pike spots.

Current areas also attract pike year round. As an example, on lakes the narrows between shore and an island often has wind-induced current travelling through it. This pushes in baitfish and pike follow. A particularly productive zone in autumn, however, is the tail water below river and reservoir dams. Baitfish congregate here in numbers as do walleye northern pike wait in ambush in current breaks like eddies, outwash holes, and deep pools.

Big tube jigs between five and seven inches are a supreme autumn bait. The bait’s thickness also appeals to northern pike stocking up on calories. When pike are sluggish as a result of cold water these baits also have just enough action to get fish interested. Their multi-filament appendages wave at the slightest movement and are deadly at triggering bites when pike are sluggish. Tubes are outstanding lures to work on swimming retrieves. Pumping the rod tip during the retrieve will add either a side-to-side twitch or an up-and-down bob to the tube depending on its rigging.

When fishing tubes near bottom, be alert and keep a feel on the bait at all times as it sinks. Tubes fall in a shimmy or a spiral that imitates a dying fish and pike often strike during the initial drop. Once on bottom you can use either a lazy, lift-drop swim or a drag-pause retrieve.

Hooking Followers
Fall fish can be lazy and follows are common. The best scenario is spotting an aggressive fish a distance from the boat. In this case, try speeding up the retrieve or adding some snaps. This imitates escape-moves and sometimes triggers bites. If the fish appears lazy, slow the retrieve slightly. If working the bait along bottom add pauses or experiment with the length of drags. Slow twitches that impart an escape-like dart to tubes can also evoke strikes. If you spot a following pike close to the boat while your jig is travelling upwards, letting out line so the jig falls is your best option.
Tackle Tips
Rig tube jigs using a long-shank jig head. Large baits featuring a wide body cavity will accommodate a range of jig head styles. Also, adding a stinger treble hook on a wire leader to large seven inch tubes can help with hook-up rates when pike bite short.