Pike grow to a relatively large size; lengths of 59 in and weights of  55 lb are not unheard of and have been recorded in Wawang Lake.

Pike are known to spawn in spring when the water temperature first reaches 48 °F.  The males are first at the spawning grounds preceding the females for a few weeks. The larger females tend to be earlier than the smaller ones. Mostly a female is followed by several smaller males. When a pair starts slowing down the male will put his tail under the female’s body and release it’s sperm that is mixed with the eggs due to the tail movement.

The spawning consists of a great number of these moves several times a minute and going on for a few hours a day. Every move between 5 and 60 eggs are laid. A female can continue the mating for three days in a row. After the mating the males tend to stay in the area for a few extra weeks.

The color of the sticky eggs is yellow to orange, the diameter is 2.5 to 3 mm. The embryos are 7.5 to 10 mm in length and able to swim after hatching but stay on the bottom for some time. The embryonic stage is 5 to 16 days, dependent on water temperature (at 66°F and 50°F, respectively). Under natural circumstances the survival from free swimming larvae to 2.9 in. pike is around 5 percent.  Pike can reach the reproductive stage in a year, femails being 11 in., males 7.4 in  Pike normally live 5 to 15 years but can be as old as 30.

Life expectancy and growth are dependent on circumstances. Some Canadian populations grow to great lengths in a short time while eating nutrient rich herring.  Wawang Lake is abundant in lake herring and support many  trophy sized northern pike.

The young free swimming pike feed on small invertebrates starting with daphnia, and quickly moving on to bigger prey like isopods like asellus or gammarus. When the body length is 1.5 to 3 in. they start feeding on small fish.

The fish has a distinctive habit of catching its prey sideways in the mouth, immobilising it with its sharp backward pointing teeth, and then turning the prey headfirst to swallow it. It eats mainly fish, but on occasion water voles and ducklings have also been known to fall prey to pike. Young pike have been found dead from choking on a pike of a similar size.   Northern pike also feed on frogs, insects and leeches. They are not very particular and eat spiny fish like perch and will even take sticklebacks if that is the only available prey.

The northern pike is a largely solitary predator.  It migrates during a spawning season, and it follows prey fish  to their deeper winter quarters.  Sometimes have observed groups of similar sized pike that might have some cooperation and it is known to anglers pike tend to start hunting at the same time, so there are some “wolfpack” theories about that.

Large pike can be caught on dead immobile fish so it is thought that these pike move about in a rather large territory to find the food to sustain them. Large pike are also known to cruise large water bodies in shallows, probably pursuing schools of prey fish.

Smaller pike are more of an ambush predator, probably because of their vulnerability to cannibalism. Pikes are often found near the exit of culverts, which can be attributed to the presence of schools of prey fish and the opportunity for ambush.

Lake fishing for pike from the shore is especially effective during springtime, at which stage the big pike move into the shallows to spawn in weedy areas, and later many remain there to feed on other spawning coarse fish species to regain their condition after spawning. Smaller jack pike often remain in the shallows for their own protection, and for the small fish food available there.
For the hot summer period and during non-active phases the larger female pike tend to retire to deeper water and/or places of better cover. This gives the boat angler good fishing during the summer and winter seasons. Trolling  is a popular technique.

More and more pike are released back to the water after catching (catch and release) and on Wawang Lake it’s mandatory, but northern pike can easily be damaged when handled. Handling those fish with dry hands can easily damage their mucous covered skin and possibly lead to their death from infections.

Since they have very sharp and numerous teeth, care is required in unhooking a pike. It is recommended that barbless trebles are used when angling for this species as it

simplifies dehooking. This is undertaken using long forceps, with 12 in artery clamps the ideal tool. When holding the pike from below on the lower jaw, it will open its mouth. The pike should be kept out of the water for the minimum amount of time possible, and should be given extra time to recover if being weighed and photographed before release. If practising live release, it is recommended to call the fish “caught” when it is alongside a boat. Remove the hook by grabbing it with a pair of needle-nosed pliers while the fish is still submerged and giving it a flip in the direction that turns the hook out of the mouth. This avoids damage to the fish and the stress of being out of water.

Compared to other fish like the eel, the pike does not have a good sense of smell, but it is still more than adequate to find the baitfish. Baitfish can be used as groundbait, but also below a float carried by the wind. This method is often used and best done in lakes near schools of preyfish or at the deeper parts of shallow water bodies, where pike and preyfish tend to gather in great numbers.

Pike make use of the lateral line system to follow the vortices produced by the perceived prey, and the whirling movement of the spinner is probably good way to imitate or exaggerate these. Jerkbaits are also effective and can produce spectacular bites with pike attacking these erratic moving lures at full speed. 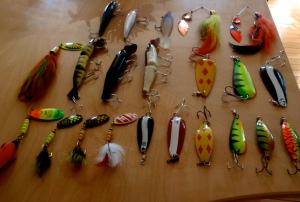 A collection of popular northern pike lures – but not limited to.

For trolling, big plugs or softbaits can be used. Spoons with mirror finishes are very effective when the sun is at a sharp angle to the water in the mornings or evenings because they generate the vibrations previously discussed and cause a glint of reflective sunlight that mimics the flash of white-bellied prey. Most fishermen tend to use small lures but often that is not advisable because pike have a preference for large prey. When fishing in shallow water for smaller pike, lighter and smaller lures are frequently used.