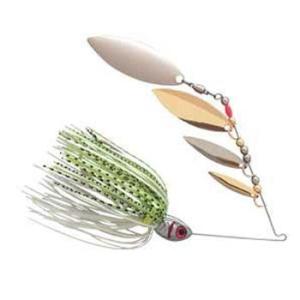 Trolling spinner baits is a technique every northern pike fisherman should have in their arsenal.

The idea is to quickly fish pike spots, such as weed flats and break lines, searching for actively feeding fish or enticing neutral ones to bite.

To properly troll spinnerbaits, match the bait’s weight to the trolling speed.

When using a short arm, 1.5-ounce to 2-ounce trolling spinnerbait, run it between 75 feet to 120 feet behind the boat.   Run them this far back because it’s out of the prop wash area. You will want the bait to pop out of the water every five to 10 seconds.

Lure Pops Out Of Water

The popping attracts pike and in order for the sound to be effective, the baits must be out of the prop wash’s disturbance. Trolling long lines also allows you to position baits over structure too shallow to drive over because of the lag time between the boat and the bait.

When speed trolling, run the baits just below the surface, but not popping out.   At this speed popping baits lose their effectiveness. Use 2-ounce to 3-ounce baits, 75 feet behind the boat, trolling them between 4.5 mph and 5.5 mph. If you want to troll faster, use 4-ounce to 6-ounce baits.

When speed trolling, regularly position baits close to the prop wash.  Baits run beautifully on the side of the prop wash, they dance because of the different currents in the water, darting back and forth, giving you a real irregular troll out of them.

Turning is also helpful when working weed edges or breaklines. Meandering along a breakline or weed edge allows you to fish different depths as well as structure and cover on a trolling run, increasing your chances of finding fish.

Spinnerbaits can also be effective over rocky structure. After passing a point, it is advisable to cut the motor and drop the bait down a bit, count to five and then engage the throttle again.   This causes the bait to sink then swim back up to the surface. A lot of time it’s on the uplift when a fish will hit. A BIG pike that sees a bait suddenly shoot to the surface might think it’s a baitfish trying to escape and these big predators will react, hitting it to prevent it from getting away.

To troll spinnerbaits for pike make sure you have the right gear. Rod holders reduce arm strain and must be strong enough to sustain a pike’s strike. With holders you can position rods, and subsequently, the path of the baits.

Longer rods between 7 feet and 8 feet, in medium- to heavy-action are good for trolling. Reels with high gear ratios are crucial to quickly play pike, minimizing stress to the fish. Line counter reels are also helpful. Spool reels with 80- to 100-pound-test superbraid, and use a strong wire leader.

Keep drags loose, especially when using superbraid lines, otherwise you’ll pull baits away from fish or your gear may fail under the force of a hit. When you get a hit, quickly grab the rod out of the holder. Do not to set the hook too hard. Trolling at these high speeds will often be enough to set the hook. After the hook set, cut the engine to fight the fish.

Trolling spinnerbaits allows you to cover vast stretches of water, increasing your odds of finding a feeding fish throughout the day.

Take advantage of trolling to explore new areas you haven’t fished before or to work productive water. Don’t be afraid to troll fast for pike, these freshwater brutes are torpedo’s and notorious for slamming speeding spinnerbaits.