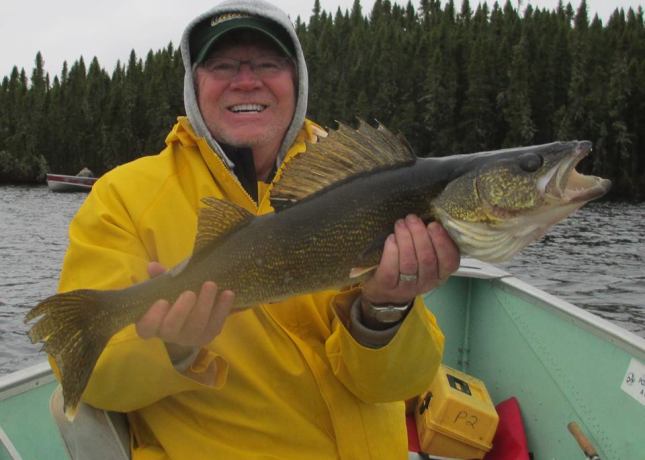 For many anglers trolling has always been one the most effective fishing techniques by presenting lures to numbers of game fish at a precise depth or spread out over a large area. There are two key fundamentals for a good catch, trolling at the proper speed, and depth of the appropriate lure choice. With the modern innovations of trolling gear and tackle today anglers no longer have to guess how deep or how fast their lure is running.

Downriggers
Used specifically for constant trolling depth. The downrigger is a winch-type mechanism that feeds cable off a rotating reel through a guide system along an extension arm. A weight is attached to the end of the cable and the line release is attached to the weight. The fishing line from an independent rod and reel is attached to the release mechanism on the downrigger cable. By lowering the weight (ball), you can drop the line down to the desired depth. A footage counter is connected to the reel unit to indicate the specific amount of cable that has been released. At the desired depth the reel is locked into place.

Trolling is the most effective way to catch many species of fish. A moving bait or lure in the water trolled at the depth where fish are present is the best way to ensure a hookup. The use of modern downrigger technology further improves trolling results. A downrigger is a spool of wire/cable mounted on your boat. A heavy weight is hung on the end of the braided downrigger wire. A downrigger release is hooked to the wire and your fishing line is hooked into the release. The downrigger can then be lowered to precisely the fish depth. When a fish hits, your line is released and you fight the fish on your rod and reel free of heavy lines  and weights.

Better downriggers are equipped with line depth counters so you know exactly how deep you are fishing. A fish finder and a downrigger are a deadly combination. The fish finder shows you what depth the fish are and the downrigger allows you to fish exactly in front of them.

Downrigger models range form portable clamp on styles, permanent mounts, some with electronic motor retrieval systems capable of lifting downrigger weights of up to 10lbs 100 feet down by a simple push of a button. Other new features on downriggers are networked with electronics, a speed sensor can be attached to the cable indicating how fast the lure is moving at that depth. Bottom tracking sonar systems using a transducer on the transom sends a programmed signal to the downrigger that will raise and lower automatically the weight off the bottom, or jig the weight up and down giving action to the lure with a auto setting. Multiple downriggers can be operated off of the same sonar signal working simultaneousl

Trolling Boards
For increasing the spread of the trolling pattern as fish move to the side when the boat passes over them trollers have two options. Trolling boards that plane to the side on a separate cord which is held onboard by a planer mast. Fishing line (s) are

attached to the cord using manufactured line releases or wire loops and rubber bands, as the boat moves forward the release slides down the desired point, upon a fish strike trips the release to fight the fish on a free line.

Online Side Planers
They are attached to the fishing line by the use of a line release ( clip on / tension clip). As the boat moves forward they plane to the side upon a fish strike the board will release and slides down the line until it hit’s a stop (swivel/bead) several feet from the lure.

Both trolling board and side planers allows the angler to run multiple fishing lines behind the boat covering a vast area.

Diving Planes
This is a circular diving device commonly know as a Dipsey Diver. Depending on how the rudder is set it will track right, left, or straight. The fishing line is tied directly to the front eye and snapped on a release. The lure is attached to the rear eye using a leader. When a fish strike occurs the front eye releases flattening the diving plane in order to reel the fish in with out pulling against the dive setting of the plane.

Fishing Lines and Weights   Lead Core (Weighted Trolling Line)
Lead Core line came on to the fishing scene during the 1970’s as weighted trolling line. This allowed Salmon, Lake Trout, Steelhead and Walleye anglers the ability to use light weight shallow running lures such as spoons, balsa and plastic minnow lures to reach depths were the fish are present. Lead Core is constructed of two components, the inner wire made of soft pliable lead and the outer sheath of nylon braid which is color coated every ten yards for metering purposes referred as the term colors. Recently a new environmentally safe non lead line was introduced using a metal alloy wire in lieu of lead. Weighted trolling lines are available in 100 – 200 yard spools ranging from 12lb to 45 lb test ratings.

The amount of weighted trolling line spooled on your reel is totally dependent on the species of fish you are targeting by the depth required, as a example Great Lakes walleye anglers may use 30 yards of weighted line or three colors were as a Salmon angler may spool the entire 200 yards or twenty colors. The approximate rule dependent on the lb test is every two yards of weighted line will sink one foot. The only reel type to be used for weighted trolling line is a conventional level wind trolling reel, the line capacity is based on the species ( smaller for walleyes larger for salmon). In spooling the reel a line backing should always be used this also helps to fill the reel to the proper line amount. The most popular line backing used today is the super braids which is tied to the weighted line using a Albright knot, after the weighted line is spooled a monofilament/fluorocarbon leader is tied using a Uni-knot.( Note: When tying backing or a leader to lead core remove the inner wire) This entire line set-up is referred as “segmented” which when properly used places the weighted line and lure at the feeding depth of fish. Trolling weighted (lead core) line is a technical presentation requiring a level of expertise and knowledge. If your considering using this trolling technique your success would be best served if you research the fishery and species before purchasing the proper equipment. 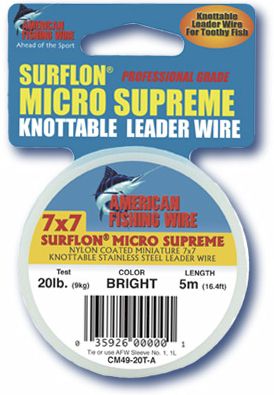 Wire Fishing Line
Wire is another trolling line option especially if your fishing presentation requires to go very deep. Wire lines come in a variety of choices, solid and stranded. Solid wire know as Monel is a metal nickel copper alloy which will go deeper than stranded based on the ultra thin line diameter and weight. Stranded offers many versions made of stainless steel or copper, in cable-laid wire, 49 strand, three and seven strand wire some of these come with vinyl coatings used mainly as leader material. One of most popular wire line for freshwater fishing is the seven stranded six wrapped or braided around one. Copper seven strand is utilized as a alternative to lead core were as the weight of copper is double than lead core this achieves the same depth of lead core with only half the amount of line. The advantages of using wire line are numerous when compared to other conventional lines such as braided or monofilament, wire line with the weight and the ultra low diameter cuts through the water easily getting deeper using less line, it also has very low line stretch thus telegraphing fish strikes as they happen. Getting set-up with a wire line outfit requires all special equipment, reels are trolling level wind with a metal or stainless steel spool to accommodate wire line, rods require hardened line guides that wire won’t cut along with a roller tip or all line guides using rollers. We highly recommend if your looking to use wire as a trolling outfit, go to a pro shop that specializes in wire line rods and reels. One of the most common problems in using wire starts with correctly spooling the backing and wire on the reel to the proper level. Fishing wire with the proper knowledge and set-up will add another dimension to your arsenal increasing your catch rate. 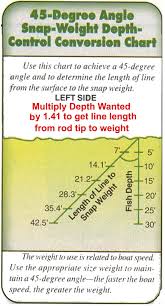 Snap weights are a attached/removable weightsystem ideal in getting your bait down to suspended Walleyes, Salmon, Trout, Bass and Muskies when flat line trolling. The weight sizes are relatively heavy 1/2 to 8 that snaps on to the fishing line by a spring tension clamp, the weight is secured on a metal ring below. Upon a fish strike the line is retrieved to the snap weight and un clipped from the line to fight the fish. With the various sizes of

weights available offers a range of different depth settings with out having to re rig your rod. Most anglers start by using the 50/50 system placing the snap weight halfway out on the line. By moving the snap weight closer to the lure increases the response to the movements of the boat and your rod. Moving the weight farther away from your lure it becomes less responsive, but more influenced by the action of wind and waves.

The farther back the snap weight is from the lure will reduce spooking the fish from biting. Snap weights Inline trolling weightscan be used on braided line, low stretch monofilament / fluorocarbon and lead core line.

Inline Trolling Weight
Another option for lures and baits to be trolled at a desired depth are online trolling weights (sinkers) these include torpedo or through the use of a down weighted keel design for stabilizing the weight as it travels in the water preventing unwanted wobbling. All good trolling sinkers have bead type chains and swivels to minimize line twist and should not reduce the action of the lure by having the bulk of the weight hang below the line.