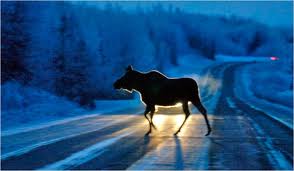 If you’ve ever driven any distance through the Canadian bush – especially endless miles of tree-lined, two-lane highways, then you will know about the moose as they often move about our Canadian highways freely.

There are foreboding signs along the way featuring outlines of these hulking creatures nonchalantly strolling across your path. The message is not one of protecting the environment, it is one of avoiding mortal danger and a warning to YOU.

An uneasy feeling starts to set in right about dusk, when the light of the sky darkens enough to match the light thrown by your high-beams.

If you know about the threat of the moose you will tend to slow down just a little, and your eyes will skirt furtively for motion and shadows along the treeline. Because you do not want to hit a moose. If you do, it will almost certainly be THE event of your day. Although generally timid, the males become very bold during the breeding season, when the female  sutter a loud call, which can be heard from up to 2 miles away, and are often mistaken for lowing cattle; at such times they fight both with their antlers and their hoofs. Fierce clashing of antlers between males is also not uncommon during the rutting season. The female gives birth to one or two young at a time, which are not spotted. The gestation period for a moose is about 216-240 days. After the young are born, they drink the mother’s milk, which is very high in fat and other nutrients. Because of the milk, the calf grows very fast.

The cow moose is reported to kill more people in Canada than any other animal (far exceeding the toll of the grizzly bear). These large animals can be extremely protective of their young, and caution should be exercised when approaching a cow moose.

In the spring, moose can often been seen in drainage ditches at the side of roads, taking advantage of road salt which has run off the road. These minerals replace electrolytes missing from their winter diet. However, this is where the most potential danger lies in these locations as the moose will come out to the open for various reasons one especially to get away from the flies. So on your journey up to Wawang Lake be sure to heed the warning signs – keep your eyes peeled and scan the timberline on each side of the road for these majestic animals.