Fall is a transition period, and as autumn leaves change colors, many anglers switch almost exclusively to trolling for northern pike from late August to ice-up.

Yet the fall still holds plenty of casting opportunities, and it’s the season for trophy fish. Casting in fall conditions is tough going; the trick is using effective baits for the cold-water conditions. Here’s an overview of some fall casting baits with some tips on how to use them.

Jerkbaits
You should consider jerkbaits as mandatory lures for any autumn outing. The surge-and-pause action on lures, such as Bobbie Baits or Suicks, appeals to the sometimes-sluggish disposition of fall pike.

The key to working jerkbaits is long, slow pulls, big pauses, and long ‘hang time.’ The more hang time the better.  This hang time gives pike an opportunity to move in and inspect baits. The next pull of the lure often triggers hits 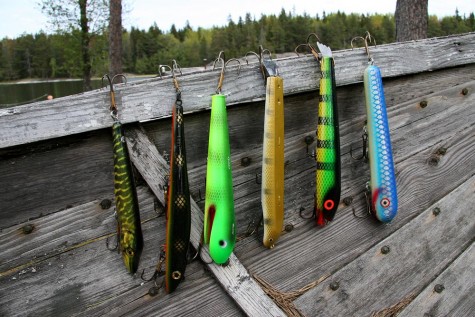 There is no wrong place to cast jerkbaits in the fall. Prime areas include deep, healthy weedbeds, sharp breaks, and points near deep water. Having weighted models is important to be able to count them down to effectively work deep structures.

A good assortment of fall baits for pike would include:

Glidebaits
Glidebaits are another good fall choice. They don’t require long pulls of line like jerkbaits. Rather they’re worked with a short twitch, followed by a pause on slack line. This causes the bait to dart and swim to one side. On the next twitch it will cut to the other side.

Glidebaits give off a slow, dying baitfish action. Their slow presentation can trigger strikes.  that because baits dart out to the side, it gives them a large profile, which is a big-time fish attractor. Popular gliders include:

Fishing with glider on a sunken island

Glidebaits are particularly deadly over top of deep weed beds and they also do well anywhere you’d throw a jerkbait.

Minnowbaits, Crankbaits
Some pike fishermen like to use baits that maintain a relatively straight trajectory when retrieved. The straight path makes it easy for pike to hone in and hunt the bait.  Beyond jerkbaits, minnowbaits, such as Musky Mania Tackle’s Jakes or Grandmas, are two top choices for fall casting. Work them on a straight retrieve with the odd twitch.

Another choice is crankbaits such as:   Musky Mania Tackle’s Ernies or Joe Bucher’s Depth Raiders, to get down deep near the edges of structure. These baits trigger hits when banged along rock piles or fished on a stop-and-go retrieve. Use baits in both straight and jointed models.

Plastic Baits
Finally, large, weighted, plastic baits or swimbaits, such as Muskie Innovation’s Bull Dawgs, Castaic’s Swimmin’ Sardine, or Storm’s Wildeye Swim Shad, are fall favorites for many anglers. Extremely versatile, these baits can be brought in on slow, steady retrieves, or allowed to sink to a certain depth and then brought in on a rise-and-fall pattern. Additionally, they can be fished like giant jigs, making them an excellent bait to probe deep holes or drop offs.

Slow Retrieve
Regardless of the type of bait, the importance of working them slowly. is because fish don’t feed as frequently in the fall as they do in summer, so you need to give them a presentation they won’t miss.

Fishing with glider on shallows

Although there are a variety of baits to cast in autumn, one factor always remains constant — the importance of powerful hook sets. Cold-water strikes range from the subdued, with the sudden feeling of extra weight on the line, to shoulder-socket jarring. Act quickly and drive those hooks home. Fall is trophy time and you might just hook the biggest fish of your life!