Think Outside The Box For Pike

There is a corner where the big bucktailed spinnerbaits are hanging, surrounded by a mix of both deep-diving and shallow-diving crankbaits in all the popular color patterns. There are a few spoons mingling with the big wooden and plastic minnow imitators, but one-fourth of the box is laden with big jigs next to packages of big plastic bodies. There are even a number of pre-tied wire leaders sitting on top some 3/4- and 1-ounce egg sinkers. The leaders are sporting 2/0 hooks secured directly to the stranded wire, with a ball-bearing swivel secured to the other end.

Jigs work well for a vertical presentation as well. When pike are just off the bottom at the base of a weedy flat or point, get right over them with the boat and just drop the jig straight down – twitch the jig and keep it moving, but when you’re fishing vertically like that, you can target those deep pike you see on the sonar.

To get right into the vegetation,  take a pre-tied leaders and rig the plastic worm up Texas style and fish it just like for bass. Use a cone sinker above the swivel for this so you can get it through the weeds easily and just move that worm through the weeds. Pike like vegetation and you can dig them out of it with this big plastic worm rigged weedless.”

Those pre-tied leaders also work well with live bait it’s no different than a live-bait rig you would use for a walleye except that you have a stranded-wire leader and a bigger — much bigger — hook.

Live-bait rig for pike works best along a sparse weedline or just out from the vegetation where there is little vegetation to get snagged on and if you’re working in heavy cover with live bait, you’re pretty much stuck using a bobber, but when you can work an edge, this live-bait rig is the best option.

Live-bait rigging for pike and jigging for them with plastics are both techniques more prone to a walleye or bass angler’s game plan. These are probably techniques that only get used under unusual circumstances, right?  Actually, the standard lures are going to catch fish, no doubt about that.  But when you’re on a body of water and the weather has created some tough fishing conditions, these non-traditional techniques should be your go-to options. It’s just that anglers are so used to the standard presentations that they don’t think about trying something different.

Like a swim bait?  Bass fishermen love swim baits, but pike fishermen still haven’t discovered how good these work. Tie a piece of colored yarn to the eye of that treble hook, and you’ve added a splash of color and made the lure a little different, maybe more attractive to a pike. 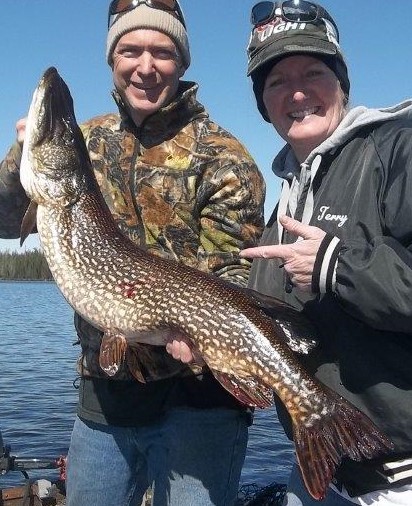 Scenario:  It was early season, and the pike were still up in the backwater vegetation and shallows, we  had been dragging spinnerbaits and shallow-diving crankbaits through the cabbage and tree branches, and all we caught were a few small northerns. You could see these schools of minnows busting out of the water around you and we were casting to this forage because we figured something was trying to eat it, but we couldn’t get the fish to bite.

After a few frustrating hours, we started digging for something different and discovered a package of 4-inch Slurpies’ Swim Shads we had picked up at the bait shop to try. We tied one on.

Turn out that was the right move, every time some minnows would break the surface we would cast right to the boil. That lure wouldn’t sink a foot and a big pike had grabbed it. We tried crankbaits and spinnerbaits, but it was the swim bait that the pike wanted. Needless to say we used them a lot since then, and they’re something different that the pike haven’t seen a lot, and that lure triggers bites. For working over the tops of a big weedbed, you can’t beat a swim bait.”

So, are the spinnerbaits and crankbaits in the tackle box becoming obsolete? Hardly, those lures still catch plenty of pike, but we also learned a few tricks to spice them up.

Considering what we might do to a spinnerbait that has had a few pike chase it to the boat and fail to grab it.   We pulled off the plastic skirt and replace it with a scented body, like a Berkley Power Hawg or a 7-inch Gulp Turtleback Worm.  This way, not only did we get some additional squirm action, but we also got the benefit of the scent.

But you can’t doctor the crankbaits without messing up the action, right?  Sure you can.  Just take a piece of thin red yarn and tie it to the eye of the back treble hook. That little dash of color, and pike really trigger on that red, won’t affect the action of the lure at all, and it works. But don’t limit yourself to just red. Sometimes green or orange or even blue might be the color that does the trick.

Does the yarn trick also work for spoons, too?  You bet it does. Tie a piece of colored yarn to the eye of that treble hook, and you’ve added a splash of color and made the lure a little different, maybe more attractive to a pike.  Sometimes we’ll take a Johnson Silver Minnow and thread a grubtail on the hook. That adds some scent, too. It’s a little added enticement that can make a big difference to the outcome of your fishing day. 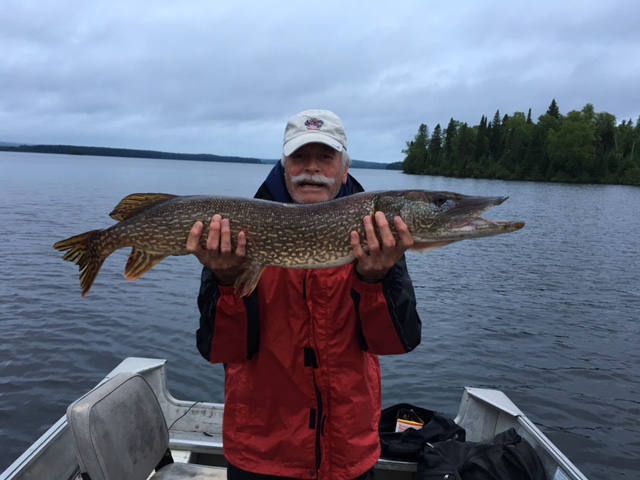 What about the old “minnow-under-a-bobber” presentation that is a fixture in a pike angler’s repertoire? There isn’t any thinking outside the box for that technique, is there?  That’s why we carry that scissors.  Clip one of the side fins or trim off the tail on that sucker or shiner you’re dangling under the bobber, and you get a struggling minnow instead of one that is just happily sitting there. Pike can’t resist a minnow that’s struggling.

What differentiates the anglers who catch fish and the ones who don’t is the fine line between those who are using presentations that they were told to use and hope for a bite, and those who think outside the box to create a bite. Success  is always thinking outside that hefty tackle box with all those lures and gadgets — which eventually lead to catching  fish!

Nothing is better than catching fish all day on the lake and then thinking of how to prepare your fresh caught fish for the evening meal, once back at camp.

You’re in for a yummy treat with this fish dish for sure!

Directions  first be sure to remove bones.

Line broiled pan with foil and place the fillets on the rack. Sprinkle lightly with salt and pepper. Combine remaining ingredients and use to baste the fish. Place the broiler pan 4 inches from heat and broil, allowing 10 minutes cooking time per inch of thickness. Do not turn the fish. Baste several times during cooking. Makes 4 servings.

“No angler merely watches nature in a passive way.
He enters into its very existence.”