Casting for northern pike should be done with a bait casting rod in the seven to eight foot range and fifty or sixty five pound test braided lines, like Power Pro or Tuf Line.  Carry spinning tackle in the same actions too. Seven strand wire and fluorocarbon leaders are obviously mandatory no matter what technique you’re using. In the spring you’ll be dealing with a lot of fish most days, and there’s almost always big ones to be had. A good leader that will hold up to a lot of abuse is very important. Use knotted Sea guar fluorocarbon in forty to sixty pound test. This stuff is durable, you can tie with it, and the average leader will outlast a wire one. Year in and year out, floating and suspending minnow baits are the go-to lure. Between about five and eight inches seems to be the best size range. In bad winds, larger, heavier, suspending baits like H12 Husky Jerk or Suspending Storm Thunder stick are easier to cast and control. When you’re working lures of this size in bad wind, braided line helps you control and feel the bait when it’s far from the boat and a big bow develops in your line. Plus, even little bumps or pops of your rod tip get transmitted right to the nose of the bait.

Floating minnow baits kind of fell out of vogue after everyone started making suspenders, but, baits that run high in the water and rise when you stop moving them can be magic at times. They’re tougher to cast in bad winds, but well worth the effort! Three of the best are:

Six to nine inch Suicks are great too, and like the #18 Rapala, they cast very well. You can use floaters and suspenders slowly, with lots of pauses, or fish them faster with more snapping and reeling.

Jigging and trolling are two options that consistently produce early in the year also. If you’re not doing well casting, try weaving along spots with a baited spinner rig behind a bottom bouncer, like a Northland Rock Runner.

During many of our springs we see our guests get the biggest pike trolling, and usually within five or six feet of the surface. We’ve seen poor days turned around simply by putting down the casting rods and putting the boat in gear. Using a depth finder + GPS combo will revolutionize the way you fish. Your speed control will improve and so will you knowledge of spots and how thoroughly you work them. Add in a digital map chip and it’s almost unfair!  A popular brand to use is the Lowrance electronics with Navionics map chips. 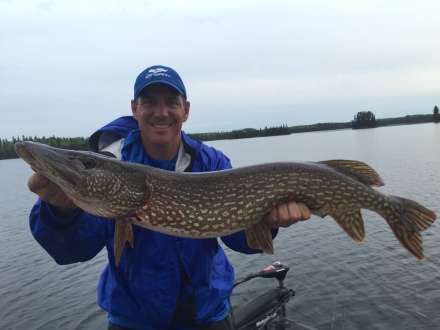 If you really want to slow down and pick apart good spots, jigging through waypoints, icons and trails is also effective. In or near moving water especially, pike will hang out with the walleye and suckers around deep holes, little slack spots or behind humps and other structures. Locking these spots down on your plotter and working them with a plastic or hair jig is time-consuming, but it works.  Spots near current really stack up fish of all kinds. Once you mark up a few, you can return again and again and find fish.  As the spring runs of walleye and pike tapered off, jigging the humps and seams just outside the rivers can be really productive on bigger fish. Having a good sonar really helps eliminate any downtime spent looking for my spots.

Along with jigging, fishing live or dead baitfish can be the only thing that produces sometimes.  Many have had the best luck doing this in the worst weather, when pike aren’t moving around much and inactive in general.   Fishing ‘meat’ also requires extra attention to your rigging and technique to make sure fish aren’t deeply hooked and injured.