When it comes to caring for Pike that you plan to use at home, the first and probably most important step in assuring a quality meal is to keep the fish fresh prior to cleaning.   Compared to other popular game fish, the flesh of Northern Pike is among the most likely to deteriorate if care is not taken to keep the fish fresh right up to the cleaning table.   When you plan to save some for the table, one great approach is to wait until later in your fishing trip before you start saving fish to take home. 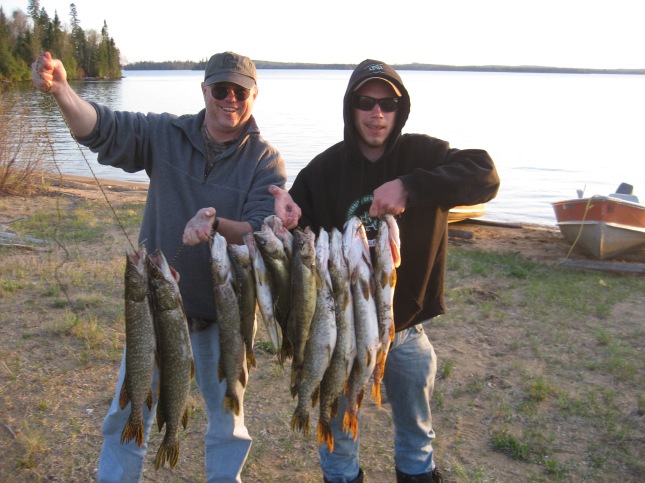 After filleting it’s best to freeze your filets properly for transportation back home from the lodge.  All your hard work out on the lake could be confiscated by a game warden for the following reasons:

Keeping fish frozen during your stay allows for easy transportation all the way home.  Frozen fish takes the place of ice, however, midway you may want to check the cooler to inspect your filets and add fish accordingly as this could  make a difference at the dinner table.

Another key factor in preparing gourmet meals using Northern Pike is to avoid saving Pike in the freezer for periods of time.  Pike flesh contains a particular Amino Acid that breaks down fairly quickly while fish are stored in the freezer too long. So even if you’ve taken great care to keep the fish fresh up to this point, you could be disappointed when you pull out a package of fish that you’ve been saving for that special occasion.  Because Pike are not well suited for long-term storage, at the simple rule of thumb is Pike are to be eaten within a couple of weeks.

Removing the “Y” bones from Pike fillets is part of the mystery that has kept lots of otherwise willing anglers away from using these fish in recipes and removing these small bones is really easy! Even the smallest Pike can be easily de-boned by anyone who can fillet a Walleye or most any other fish. In fact, even the term “Y” bone is a misnomer because this so called “Y” bone really isn’t much different than the strip of bones that you’d remove from a Walleye or any other fish caught in our waters. It just happens to be sandwiched into the grain of the fillet where it is protected from “frying out”.

This is one of those times when it would be easier to do the job than it is to describe how to do it, but look at the picture of the finished fillets and you’ll get a good idea of how to follow these instructions. 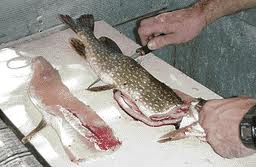 Begin by filleting the fish and removing the rib bones as you would a Walleye or most other freshwater fish. Once you have taken the fillet, study it for a minute. Take a look at the centerline that divides the fillet horizontally and notice the row of light bones visible halfway between this centerline and the top (fishes back) of the fillet. You will be making one cut on each side of this row of bones. You’ll also see that the flesh has a “grain” much like the grain of a nice oak board. The “Y” bones run with this grain and you can use this grain as a directional guide when making your cuts.

Cut 1:
Start by making a cut just above this row of bones that you can see (and feel). This first cut will be shallow (about ¼ inch) and it is perpendicular to the fillet. This simple, straight cut is used mostly as an access cut to get your knife into position for the next step. Using the tip of your fillet knife, you’ll be able to feel the edge of your knife contact the bones at the inside corner of this “L”  where the bones turn toward the top of the fillet. When you feel the knife contacting those bones, take care not to cut through them.

Cut 2:
Turn the edge of your knife toward the top of the fillet at about a 45-degree angle and follow this edge. You’ll be able to see the bones as you gently slip your knife-edge along this edge. Stop the cut before you reach the top edge of the fillet.

Cut 3:
This is the finishing touch. Start this cut below the row of bones on the side nearest the centerline and simply follow the same angle that you used to make cut 2. As the edge of your knife moves toward the top of the fillet, you’ll begin to feel this strip of bones peeling away from the rest of the fillet. Trim along these edges as needed to remove the strip and voila, you’re finished. 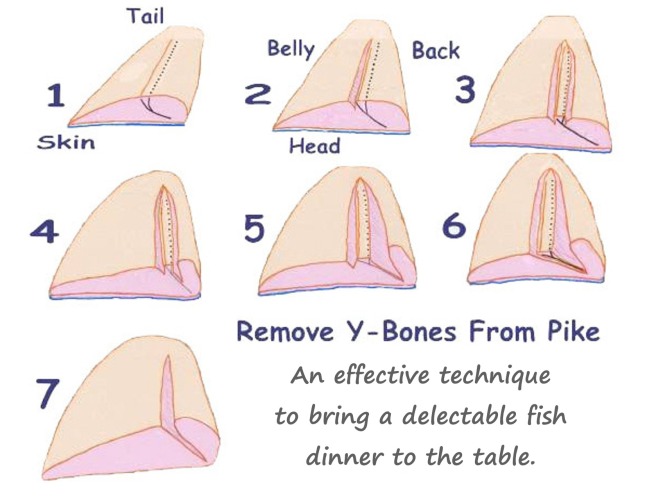 So There you have it, all you need is a little faith in yourself, a fairly good fillet knife and a little practice. You will soon learn that there is really no trick at all and before long your family and friends will be standing in line at dinner time waiting to sample your newest Pike recipe.

ENJOY YOUR NEXT FEED OF PIKE!