HOW TO CATCH TROPHY WALLEYE 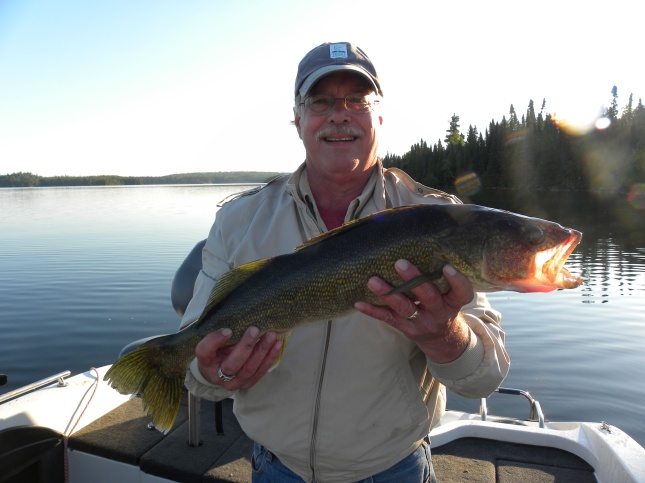 All dedicated walleye anglers seek to catch a 10+ lb. walleye, considered by many, a once-in-a-lifetime prize catch. To accomplish this task one must recognize the variety of waters that yield big walleye, using the proper fishing presentations and fishing the best times of the year which increase your chances of landing that trophy walleye.

Walleyes in the North tend to have a much longer life span even though their growth rates are not as high as in the South, but the North still produces many more walleye of 10 lb. plus.

Large walleyes are exceedingly cautious and wary, if they hear or feel anything unusual they stop feeding and head for deeper water. This why only 2 of 1000 walleyes reach this magic 10 pound size.   Our guides know this and use big fish strategies that result in catching many huge walleyes annually.

Large lakes provide an abundance of usable forage (minnows and lake herring), open space and due to large size angling pressure is reduced.

Best Times to Catch Trophy Walleye:
There are four major periods during the year when the odds increase to catch a trophy walleye, however we will only describe three of them since Wawang Lake has no winter fishing pressure: 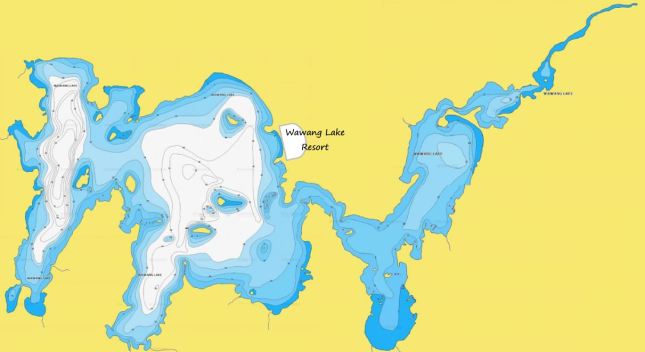 Spring
Pre Spawn: During the pre-spawn period, large numbers of big females stage into a relatively small area. Although they are not feeding aggressively, you may be able to catch a fish or two due to the sheer numbers present. The pre spawn bite is good until spawning begins.

Summer
Post Spawn: A few weeks after spawning the big females recover from and start to bite again but finding them is difficult as they are scattered. You may catch an occasional large walleye, but seldom more than one. Your chances of finding a concentration of big walleyes are much better after they have settled into their typical deeper water summer locations. The best fishing begins about five to six weeks after spawning and generally lasts two to three weeks.

Fall
Late-fall: Fishing is unpredictable, the toughest part is to locate the walleye, but if you do find them a high percentage will be big. The majority of large walleyes caught in late fall are females. Their feeding for the development of eggs for the spring spawn, females must consume more food than males, up to six times more according to feeding studies. 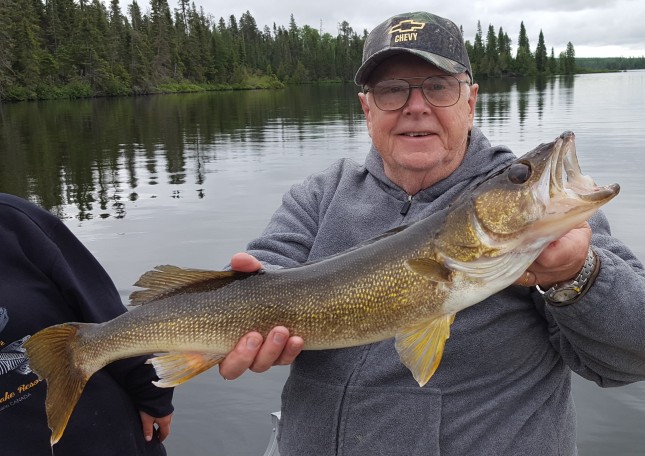 Winter
Wawang Lake has no winter pressure (fishing) and therefore our fisheries remains healthy with strong genetics and lineage.

In waters that stratify, after the fall turnover is completed the depths are warmer than the shallows. Big walleyes may swim into shallow water for short feeding sprees in the evening, but during the day they may be found as deep as 50 feet. Although difficult to find, they form tight schools, so you may be able to catch several from the same area.

Trophy Walleye Presentations:
Locating big walleyes is half the equation and other half is the proper fishing presentation. Here are a few tips to help you land big walleyes.

The first and most common mistake made by anglers is noise, whether it be dropping the anchor on top of the fish, running the outboard over the spot you wish to fish or dropping anything in the boat while fishing.

Most often large female walleyes will relate to a piece of structure similar to the smaller males, but will hang 10 to 15 feet deeper this is attributed to a walleye’s increasing sensitivity to light as it grows older. In addition, bigger walleyes prefer cooler water, and they can usually find it by moving deeper.

Increase your chances for big walleyes by fishing in the shallows during low-light periods, especially in spring and fall.  If the water is very clear, or if there is a great deal of boat traffic, big walleyes will feed almost exclusively at night. During the daytime they prefer relatively deep water, deeper than the areas where you typically find smaller walleyes.

In deep northern lakes, the shallow water temperature stays cool enough for big walleyes through the summer. If the walleyes can find boulders or other shallow-water cover to provide shade from the sun they may spend the summer at depths of 10 feet or less. In these lakes, most anglers fish too deep.

Increase the size your live bait or lures, they maybe too small to interest a trophy walleye. Many times large walleyes are caught on musky/pike baits in the 6″ – 8″ range. Larger baits will draw far fewer strikes than small ones, and

most anglers are not willing to fish all day for one or two opportunities.  But if you are intent on catching a trophy that is the price you must pay.

Big walleyes are extremely cautious, especially in clear water. You don’t need to over-rig your set-up. They’re more likely to take a bait using a size 6 hook using 6-8lb test line than 12-17lb test with a 1/0 or bigger hook. A small hook will allow the walleye to swallow the bait without feeling anything unusual and will not pull-out or break. Most large walleyes are caught away from snags and take your time to bring the fish in allowing the rod, reel and drag to do its job.