It was a clear, crisp and extremely cold January morning as Terry stepped out the back door of our log house when suddenly he stopped dead in his tracks.  In the tree line  just 100’ from the house sat a black animal looking intently and directly at Terry.  Squinting his eyes against the bright sun, Terry couldn’t believe what he was looking at.  His first thought;  a black bear?  Could it be out from hibernation at this time of the year?   No, it’s much too early for them to wander out this time the winter– could it be he thought again, questioning what he was looking at?

He blinked a second time, against the bright morning sun, mystified at what was he seeing when suddenly to the right from the corner of his eye, Terry caught a glimpse of a flash just within the thick undergrowth of timber known as the boreal forest.  It was another animal and it ran right behind the black one except this one was grey!  Hmmm, he then realized it was wolves.   His curiosity now satisfied he noticed that as fast as the grey colored wolf had sped by, the black one immediately got up and quickly followed after.  Then throughout the entire bush the air was filled with the eerie, unnerving sound of howling.  The wailing echoed all around and he quickly scanned the vast timber anticipating seeing  more – but didn’t.  They were warning the others he thought;  to run, to get away – quick!   It sounded by the urgency of their screams.

He watched the two wolves run past the house towards the lake but didn’t see any others.   Giving no mind to the snow covering  the seat, he quickly jumped onto his snow machine and was a little surprised that it started on the first pull.  Pleased with the ease of it starting he gave the throttle a couple revs, spun the machine around and headed down to the beach in search of the wolves.  Following the shoreline he came upon where their tracks came out of the thick timber – just about where he thought they would too and noticed that they had headed out onto the open expanse of Wawang Lake.  He lifted his hand over his brow, shielding his eyes from the sun hoping to see some sign of them but he didn’t see anything.  Not detecting any sign or movement on ice in the direction they had gone he decided to try and chase them down anyways and headed out following the fresh trail.

There were four wolves in all he guessed counting the distinct tracks left in the newly fallen snow from last night.  Looking over the windshield the icy wind felt like steel rivets hitting his bare face and his eyes watered from the intense cold.   Invigorated by the hunt,  he drove on and had to frequently wipe his eyes from the frozen tears that were now forming on his lower eye lashes.   Man he thought those animals are fast, as he took another wipe with his glove, when unexpectedly there they were, right in front, fanned out, fully stretched out and running full speed with the big 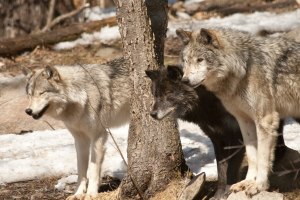 black in the lead.  Terry could see that there were two black and one was obviously the Alfa male – since he was BIG, very big – the size of a small bear in fact.   Two of the wolves were noticeably smaller and Terry soon realized that this was a small pack.

As a trapper, his intention was to bring down the big black wolf as the pelt would bring in a pretty nice bounty to pay our bills and provide a nice spread of fresh food for our table.  Ever so slowly he began coming up alongside them to their right.  Whether it was the sound of the machine or its shadow, the wolves abruptly veered away and picked up speed trying to distance themselves from this unknown danger.  Squeezing down hard on the throttle he kept up with them and at the same time he noticed the wolves were beginning to show signs of fatigue yet steadily raced on as their tongues hung out, loosely flopping out of the side of their mouths, and frost condensing on their muzzles – but they weren’t slowing down any.  It wasn’t in their nature to give up and if they did – hmmmm, it then ran through Terry’s mind that he could be facing a wee bit of a problem here.  Four against one and he estimated the big one out-weighed him by at least 25 lb. –  then he remembered he did have his trusted side arm strapped to his hip and this would give him an edge since the sharp gun blast would scare them off from an attack, if it came to that.   At least he hoped so and as this scene unfolded in his mind he slid his hand down to his hip and unhooked his holster…..just in case he thought. 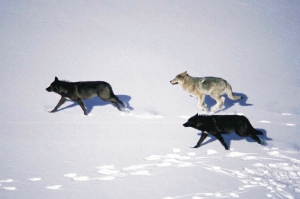 The shoreline across from the lodge was beginning to draw closer and Terry watched in admiration at the wolves’ stamina and couldn’t help but respect them for  their sheer determination to flee danger – and it was at that moment he decided against breaking up this family.  Mom and Dad still had much to teach those young he thought and best left to have engrained the values, customs and traditions into those young than for them to turn into outsiders or misfits he thought – no, there’s enough of them out there as it is.

Easing up on the throttle, he began to slow the machine down as he watched the wolves make distance between him and them.  Stopping the machine he noticed that they had now reached the timberline and quickly disappeared in the bush with the only trace left of them was their tracks.  It then ran across his mind how easily he could’ve taken BIG Black   – oh, but what the heck he thought as he shrugged his shoulders while the muscles in his jaw twitched just below his earlobe (a common characteristic when he’s in methodical thinking mode) we still had lots of moose meat left and some walleye from our last ice fishing trip as he quickly inventoried our pantry in his mind.   We’d be fine he thought again, and we always were – fine.

Now had it been a large pack known for ravaging and destroying the large & small game  in our area the outcome would’ve been much different.  Terry would not have remained this composed nor would he have controlled his own hunters’ trait.  Large wolf packs are common in our area that can consist of 30 or more.  These packs are vicious and can be very deadly by killing off the moose, black bear and other small game animals including their

Trapping in Ontario is all about day-to-day management and assessing each and every situation while out in the field – as Terry did at this time and has done so on many other occasions over the years.  Contrary to what some might believe, trappers manage their areas and realistically speaking they simply don’t kill every animal they see, as a matter of fact this couldn’t be farther from the truth since much thought goes into a season of trapping, like for instance how many beaver can be taken from a beaver house.  Breeding stock needs to be left in order to sustain the trap line for years to come.  Our family has trapped for almost 100 years and we’re proud to pass this honorable tradition onto our next generation – like the generation did before us and  just like our neighbors – the wolves.