Spinners refers to a family of fishing lures that have a metal shaped blade(s) attached to the wire of the lure. When the lure is in motion the blade spins creating varying degrees of flash and vibration that mimics small fish. Spinners will catch all types of game fish. Fish can see the flash of the revolving blade in clear or stained water, in dark or murky water they will use their lateral-line to feel the vibration from the turning blade. Spinners are relatively easy to use, they will catch fish with a simple straight retrieve, and when a fish strikes a spinner usually it will usually hook itself.

Spinners have four basic designs, first is the standard inline that have a blade or blades that rotate around a straight wire using a clevis, most all inline spinners have a weight on the wire to make the spinner heavy enough to cast. Second are spinnerbaits, this spinner is shaped like an open safety pin. They will have a lead head molded on the lower arm and a spinner attached on the upper arm using a swivel, some models have multiple blades that are attached on the upper arm using a clevis and a bead stop. Third are buzzbaits, they are similar to a spinnerbait or a inline spinner but have a specially designed rotating propeller for surface fishing. Fourth are live bait spinners that use night crawlers or minnows on a hook or a series of hooks with a spinner blade in front of the live bait.

The main fish attracting component of a spinner is the blade. The type of blade and shape will determine the depth and sound (the thump) of a spinner upon retrieve. All blades have a different amount of resistance as it travels through the water. A broad blade such as the Colorado will rotate at a greater outward angle from the wire shaft producing a lift and thump compared to a narrow willow blade which will run tighter to the shaft and spin faster producing less sound.

From the image above the Colorado will run the highest in the water producing the most vibration. The Indiana, Fluted, Turtle Back and French are intermediate styles running at mid range depth levels used for slow to medium retrieves in light river current or lakes. The Inline and Willow run the deepest as they spin tightest to the wire shaft. These are good for fast retrieves in swift conditions, and deeper water presentations. In using spinnerbait’s the willow blade is a good choice around vegetation and cover as they revolve tight to the upper arm catching less floating debris and weeds.

The sizes of spinner blades are based on a numerical system starting with 0 or 0/0, the smallest for stream trout spinners, size 3-4-5 for bass and pike up to the 7-8 for muskies along with the new popular magnum 10. The larger the blade size the more water resistance and vibration when compared to the same shape in a smaller version.

Many of the spinners today offer double blade options. The inline spinner that has two blades is commonly referred as a bulger which rides high in the water even breaking (bulging) the surface when retrieved rapidly. Spinnerbaits that have 2  blades in “tandem” provide more flash which gives the image of schools of bait fish.

There are countless blade finishes, colors and combinations for spinners today on the market, the most common are metallic hues with silver, gold and copper which provides a flash to sight-feeding predators in clear or stained water. Painted blades flash less but create more underwater contrast. They can be particularly effective during low-light conditions or in murkier water.

Tying materials to the tail of a inline spinner or silicone skirts on spinner baits adds a realistic appearance and increases the profile of the lure as it swims through the water. The dressed tail also provides lift and resistance enabling the angler to retrieve the lure at a slower rate. Years back traditional hook dressings on spinners have been animal hair (deer hair, squirrel tails and “marabou” from chickens) with a few feathers as attractors especially red. With the advancement of synthetics materials such as flashabou and silicone skirts adds a fluttering flash in different incandescent or solid colors increasing the total flash profile of the spinner.

Spinner bait skirts over the years also evolved from the solid living rubber colors to silicone skirts because of all the available molded-in patterns, metal flakes, and incandescent colors.

Depending on personal preferences and fishing conditions many anglers prefer to use an undressed spinner for speed and depth relying on the blade flash and vibration as the only attractors. Other options are soft plastic tail dressings such as an imitation minnow or tailed grub. Soft plastics are also used on traditional dressed spinners tails to change the appearance, profile and action of the lure, these are known as trailers.

Listed below is a reference guide to help you identify the common types of spinners and how they are used: 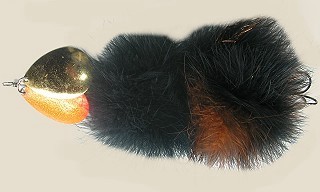 By combining two blades together adds vibration and lift upon the retrieve for shallow water. Shown with double Colorado blades and marabou tail that pulses in the water, also known as a “Bulger” 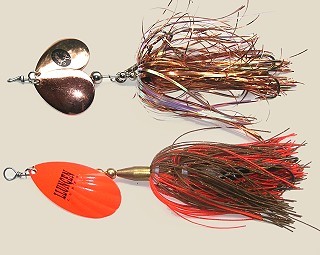 With the popularity of synthetic material used for spinner tails adds additional flash to the profile (body) of the lure. The top is tied with flashabou (tinsel) the bottom is a round silicone glitter skirt, both tails pulsates and sparkle upon the retrieve 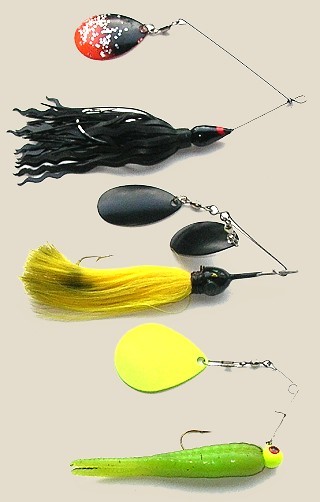 Versatility is what spinnerbaits are all about. With the open safety pin, weighted head and single hook design that runs vertical, it can be fished in and through vegetation (weedless) Slow rolled over cover, allowing it to sink, the blades will helicopter down to deeper water. Used for all gamefish.

A beefed up version of the spinner bait for big pike and muskies. The magnum spinner bait comes in 1 oz and up to 6 oz’s using large blades for increased vibration and large body profiles for big fish.

Buzzbaits resemble either a standard spinnerbait or inline spinner with the exception of a rotating propeller blade replacing a flat blade. Buzzbaits are a topwater spinner and must be retrieved rapidly to produce a loud clacking sound as they move across the surface. Excellent lure for pike.

By combining the vibration and flash of a spinner blade and the attraction of live bait, these produce an effective fish catching combination for most all species of game fish. The (top) is a weight forward spinner that is tipped with a night crawler, this spinner is cast and retrieved, primarily used on the Great Lakes for walleyes also known as the trade name erie dearie. The (middle) is a crawler harness with multiple hooks (2 or 3) and is also tipped with a night crawler, this spinner is rigged on bottom bouncers and sliding sinker rigs, for trolling of drifting. A single hook version is also used for minnows. The (bottom) is a strip on an old time fishing rig also called Prescott Spinner. Made from stiff wire with a rotating blade on front. The wire is slid through a minnow attaching a double hook on the end loop.